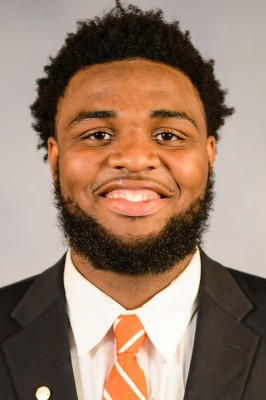 Rare is the high school freshman who knows he wants to be a Division 1 football player, and rarer is the coach who agrees that it’s a possibility. Even rarer is a person like Christian Wilkins.

Rare is the high school freshman who knows he wants to be a Division 1 football player, and rarer is the coach who agrees that it’s a possibility.

Wilkins grew up in Springfield, but lived with his grandfather in Framingham during middle school and his freshman year at Framingham High School in 2010-2011. The Framingham High School athletic director and football coach, Doherty had Wilkins for one year, and the impression Wilkins left was both sizable and immediate. As a ninth-grader, Wilkins was already about 6-foot-2 and about 230 pounds.

He had the skill to match the size, too.

“As a freshman, he was beating league all-stars at the line of scrimmage,” the coach recalled. “At one point, the other coach is yelling at his player, ‘He’s only a freshman!’ ”

Wilkins, who also started on the basketball court for the Flyers four years ago, moved back to Springfield after his freshman year.

He’ll be a freshman again next year, but the stakes are a bit higher this time.

Now 6-foot-5, 305-pounds according to top recruiting website Rivals.com, the defensive tackle out of Suffield (Ct.) Academy was ranked the 21st-rated recruit in the entire nation. He was an Under-Armour All-American as well. That is rarefied air in New England, as top-tier recruits most often hail from the southern, west-coast, or Midwestern hotbeds.

Wilkins is that rare player. On National Signing Day almost two weeks ago, Wilkins decided to attend Clemson University. It was likely a disappointment to the 22 FBS schools that offered him a scholarship. Recent national champion, Ohio State coach Urban Meyer, was but one of the coaches who came to Suffield to see one of the nation’s premier defensive tackle prospects. Of those 22 schools, Wilkins took visits at Boston College, Ohio State, Penn State, and Stanford.

And he began his high school football career playing at Bowditch Field.

“It’s great to see him have this opportunity,” said Doherty, who still stays in touch with Wilkins. “I think he’ll make the most of it. I think you’ll see him playing in the NFL.”

His coach for the last four years has been Drew Gamere, Suffield Academy’s Co-Athletic Director as well as its football coach. The school has won six of the last seven NEPSAC Super Bowls under Gamere, including four straight. It’s likely no coincidence that the titles have come while Wilkins has played an integral role on each side of the line in the last four.

In 2011, Gamere met Wilkins, who had come in from his hometown of Springfield after moving back home. Suffield is just over the Massachusetts/Connecticut border, about 11 miles away from Springfield.

“He came to campus one day with his godmother, whose son had been looking at Suffield,” said Gamere. Upon seeing Wilkins, he said, “I thought he’d be a senior or a post-grad. He was a freshman.”

After Wilkins did “a great job” in the interviewing process, according to Gamere, the school found a spot for him.

Gamere, who grew up in Brookline and was a post-grad at Suffield in 1992-1993, said he knew that Wilkins had plenty of potential. Having played and coached in the Bay State Conference at Brookline High, Gamere was aware that it was no small feat for a freshman to be on varsity in the BSC, as had been the case with Wilkins at Framingham.

“He was doing some workout with our guys in the summer, and I see him do a flat-footed backflip,” Gamere said. “That’s athleticism you don’t see from many people, let alone a guy who was 280 pounds.”

More than the raw footwork as a key part of his football talent, Gamere could see Wilkins’ character playing a key role in his success.

“On our end, he was so coachable right from the start,” Gamere said. “We knew he had upside, but the fact that he could take the coaching was initially the most promising.”

Being a top-notch football recruit who has also shined on the basketball court, just one illustration of Wilkins’ popularity is that he has 2,312 Twitter followers (@cwilkins42). He is a national name who had his pick of top-tier college football programs to go to.

According to his coaches, both past and present, he’s kept his humility throughout the process.

“Anybody who knows him knows he’s a tremendous young man,” Gamere added. “He could be class president, and that is not just based on him as an athlete.

Doherty said of Wilkins, “As nice of a kid as he is, he’s that mean on the field.”

And, by the sound of it, on the basketball court. On Friday night, in a 70-44 rout of Westminster, Wilkins netted the 1,000th point of his career. He is only the fourth male in the school’s history to reach the milestone. Among the others to achieve the feat is Vinny Del Negro, the former San Antonio Spurs standout and NC State alum.

The athleticism is obvious. Mix that with the intangibles, and Wilkins isn’t the kind of guy who comes knocking every day.

“His leadership is phenomenal,” Gamere said. “When your best player physically is also the most coachable and one of the hardest workers, it certainly makes my job a lot easier. It’s easy to be at your best when things are going well.”

Keep an eye out for Christian Wilkins next year, and in the years ahead. A football journey, one with roots in Framingham, may have only just begun.